It appears that the rivalry between Realme and Redmi will soon rise above the budget segment and will escalate to the mid-range and the flagship domain as well. Key specifications, storage variants, and pricing of Realme’s upcoming smartphone – the Realme X- have reportedly surfaced online. The Snapdragon 730-powered Realme X is tipped to take on Redmi’s upcoming smartphone powered by the same Qualcomm chip. Moreover, some details about the company’s upcoming Snapdragon 855-powered flagship, the Realme X Pro, have also been leaked. 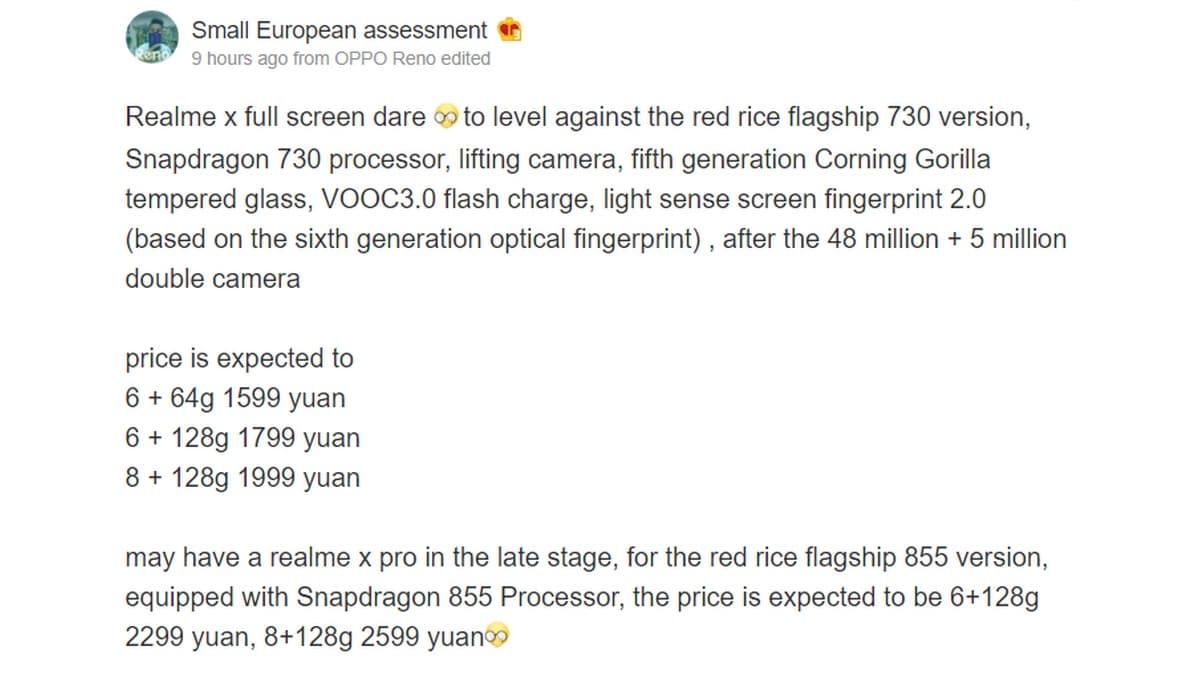 As for the leaked specifications, a tweet from @I_Leak_VN that cites a Weibo tipster claims that Realme is preparing to launch two versions of its upcoming X-series phone – the Realme X and the flagship Realme X Pro. The Realme X will reportedly be powered by the Snapdragon 730 SoC and will feature a pop-up selfie camera and an in-display fingerprint sensor that is tipped to be a sixth gen optical sensing module. The phone will be protected by a layer of Corning Gorilla Glass 5 and it will come with support for a VOOC 3.0 fast charging technology, but there is no word on the battery capacity.

In the imaging department, the Realme X is said to pack a 48-megapixel primary rear camera accompanied by a 5-megapixel depth camera. Unfortunately, there is no word on the resolution of the front camera and any notable software features. The leak further adds that the phone will come in three variants with different RAM and storage configurations.

The Redmi X is tipped to take on the Snapdragon 730-powered variant of Redmi’s upcoming flagship, but so far, we are yet to come across any concrete rumours regarding such a Redmi phone. However, tipster Sudhanshu Ambhore claims that the Realme X will go against a Redmi phone with the Snapdragon 730 SoC, which is reportedly a Lite version of the upcoming Redmi flagship that will sport the Snapdragon 855 SoC.

An even more interesting bit from the latest leak is the Realme X Pro – a so far unheard of phone – that will reportedly pack the Snapdragon 855 and will go against the highly anticipated Snapdragon 855-powered flagship from Redmi. The Redmi X Pro will reportedly come in two variants – a base 6GB RAM + 128GB that will be priced at CNY 2,299 (roughly Rs. 23,700) and a higher-end 8GB RAM + 128GB storage version that will set buyers back by CNY 2,599 (roughly Rs. 26,800). However, we advise that these details should be processed with a bit of scepticism, especially in lieu of any official teaser or confirmation from the company itself.